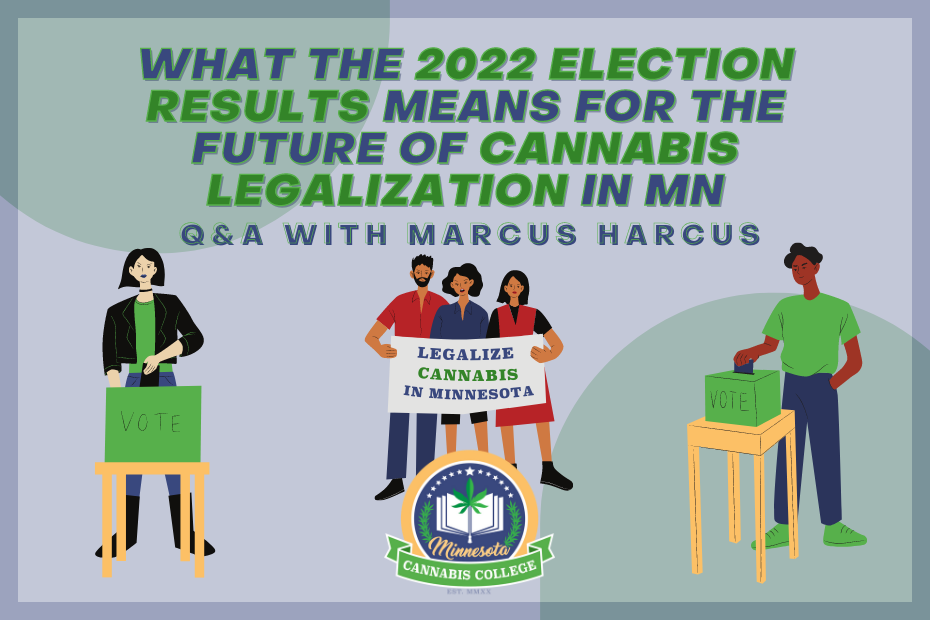 Disclaimer: The views and opinions expressed in this program are those of the speakers and do not necessarily reflect the views or positions of any entities they represent.

The election is over, the ballots are cast, and those political ads are finally off the airwaves. But many across the state were left wondering as they went to bed on Tuesday night: what does this election mean for cannabis legalization in Minnesota?

As of publication, projected results show the DFL maintaining a slim majority in the Minnesota House (70-64) while also picking up a very slim majority in the Senate (34-33). While those exact numbers could shift slightly from any recount (for example, the difference between candidates in State House District 3A currently sits at 15 votes out of over 21,000), State Senate Majority Leader Jeremy Miller has conceded the Senate to the DFL.

No matter how final tallies shake out, a pro-legalization party will control the legislature and the Governor’s office, many are asking the same question that I received via text message Wednesday morning: “Are we gonna legalize weed?”

Back in 2021, the DFL-controlled State House passed House File 600 with the support of the entire caucus. The GOP-controlled Senate didn’t even allow a hearing. With the DFL now in control of the State Senate, any potential legalization measure has a higher chance of making its way to Walz’s desk.

Adding to this, DFL Senator Erin Murphy spoke at a press conference on Wednesday where she shared that while party leaders still need to plan next steps, “it is important to remember the legalization of cannabis is a popular issue across the state.”

Former Governor Jesse Ventura also said on Clubhouse that Governor Walz called him the morning after the election to invite him to the signing. “The governor reassured me that one of the first items that will be passed,” said Ventura, was ending the prohibition on cannabis. Governor Walz even invited the former governor to the future bill signing.

It’s clear that the legalization of cannabis will once again be a hot issue in St. Paul.

To learn more about what the 2022 election results mean for the future of cannabis legalization in Minnesota, we sat down with our very own Marcus Harcus. Along with being a Minnesota Cannabis College board member, Harcus is also the executive director of the Minnesota Campaign for Full Legalization.

We are very likely going to see a full legalization bill become law in Minnesota during the next legislative session in 2023. In 2021, the DFL majority-controlled House passed a full legalization bill through 12 legislative committees, a record number. Now that the DFL has majority control of the Senate, insiders expect the bill to be reintroduced and passed in both chambers and signed into law by Governor Walz.

2. We saw House File 600 pass the MN House after going through a large number of various committees. Do you expect the DFL’s upcoming legalization proposal to have to follow the same/similar path?

I believe so. H.F. 600 will be introduced and assigned new bill numbers in both the House and Senate, but I believe the Senate may be more difficult given the simple majority of 1 vote, and the fact that there is no guarantee all 34 DFL MN Senators will support a full legalization bill until we learn all their positions. Anything is possible, including the possibility that no MN Republican Senators will support the bill. The House will probably be easier to pass again since it was already done in that chamber last year. I can’t predict at this point, and caucus leadership roles haven’t yet been decided, but it’s possible that the bill could pass through the House faster next year than in 2021.

3. I’m going to ask you the question that nearly every cannabis activist hates: when will we see legal cannabis in Minnesota? Assuming the DFL controls the MN legislature, what do you think the next few months/years look like for cannabis in MN?

My answer for the past 8 years has always been that the election outcomes will determine when Minnesota fully legalizes Cannabis. We’ve known for the past 5 years that the Democrats will be the party that ends prohibition in our state, not the Republicans, who have acted as the party of prohibition. Now that the Democrats have majority control of both chambers and the Governor’s office, they could legalize Cannabis for adult use next year. I believe the worst-case scenario would be for the bill to pass in 2024.

4. With the numbers in the MN House and Senate being so close (DFL having a one-seat majority in the Senate and slim margins in the House), what fights do you see as potentially ahead in the push to get this bill to the governor’s desk?

The fights will be internal within the DFL Caucuses, both the House and Senate Caucuses to unify their members to ensure full legalization happens even if few or no Republican state legislators support it, but pressure from the people these legislators are supposed to represent and serve can make the difference. We must be vigilant about demanding that the law does not create conditions that structure the emerging legal Cannabis industry to benefit “Big Marijuana,” and that it does not perpetuate prohibitionist policies within the criminal penalties section of the bill. We must ask legislators if they’re truly legalizing Cannabis or not because prohibition lite is unacceptable. Given the high likelihood that a full legalization bill could become law, our fight as advocates and activists is to make sure we establish the best model in the nation.

The most valuable contributions any legalization support could make to our cause is to become well-informed and well-versed about the issues relevant to ending prohibition and fully legalizing Cannabis and lobbying MN state legislators and the Governor. The more people who share their stories and demand legalization, the more likely it will be done, and we must demand an equitably regulated, reasonably taxed, and justly reparative model of full legalization, not a prohibition-lite model that is bad for businesses and consumers. Everyone who cares about these issues must pay attention to the legislative process and get involved by raising their voices in favor of getting this done ASAP and done right. Little things mean a lot when a lot of people do them, so with more than 700,000 adult Cannabis consumers in Minnesota, even 1% of us raising contacting legislators would be more people lobbying them than any other issue ever at the Capitol.

To learn more about the Minnesota Campaign for Full Legalization, visit: legalizeitmn.com